The football team begins a six-game season and prepares to show what they have worked on for the past eight months. 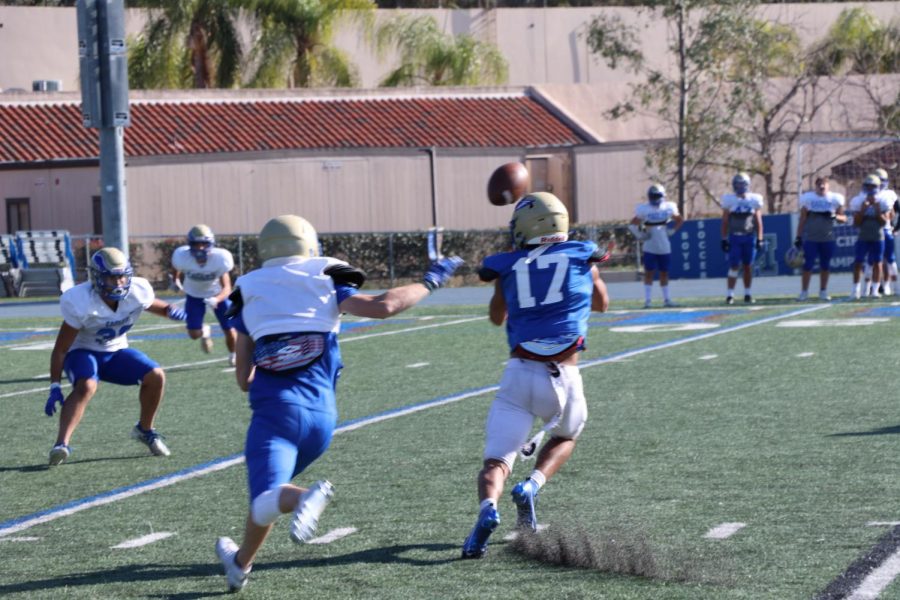 Senior Michael Buckley makes a catch during a team scrimmage.

Sprint. Stop. Back on the line. Sprint again. For eight months this was many football players’ reality. A constant cycle of rinse and repeat with no assurance that they would play a season. Luckily, due to pressure on the state government and local support, a spring football season was approved amidst the coronavirus pandemic.

The players who have stuck with the team during the off-season feel a sense of accomplishment before they have even stepped on a field.

“This is something we have been working toward for what seems like forever,” said Senior captain Drew Sulick. “It’s been a long time since we’ve worn our jerseys and had the wings on our helmets, but during that time away we’ve worked really hard because we believed we would have the chance.”

The team has built itself over again after struggling the past few seasons. With a new head coach in Anthony Rouzier and a lot of senior depth returning the team is excited about where they can go.

“We have built something special here. Coach Rouz and the rest of the staff have built a fantastic culture, it’s been really immersive and everyone has gotten on board. The players have rolled with it and contributed to it in different ways,” said Junior captain Kilian O’Connor. “We have great players and think this is our time to succeed.”

The extended offseason has been grueling for players, applying more pressure to their bodies than usually. However, with new coaching points and a renewed emphasis on conditioning the team feels they are much more prepared for the physical aspects of the season.

The team has remained tremendously healthy, the only players unable to play being those who have chosen to attend a service academy to later serve the country. Beyond the physical aspect, the team is more spiritually healthy now as well.

“The added time has been great,” Sulick said. “We’ve taken it all in stride. Our new strength and conditioning coach, Coach Holley, really knows what he is talking about and all the things we have down in training have us feeling great. Our chemistry has grown as well as would be expected with just practicing and being together constantly for so many months. This senior class is special. We are all dedicated and excited to see how our careers will end together.”