The stay at home protests are ignorant and dangerous, while disrespecting the nation's medical workers.

There is no doubt that an American’s ability to protests is one of the most patriotic activities we can engage in. After all, our nation began with protests to protect our liberties. However, screaming at nurses and police officers while bearing deadly weapons more closely resembles the actions of terrorists than of peaceful protestors. While it is perfectly fine to conduct a protest against a law or order you feel is unjust, posing a threat to the safety of others through aggression and disobeying orders with regard to the welfare of the general public is not the proper way to cau 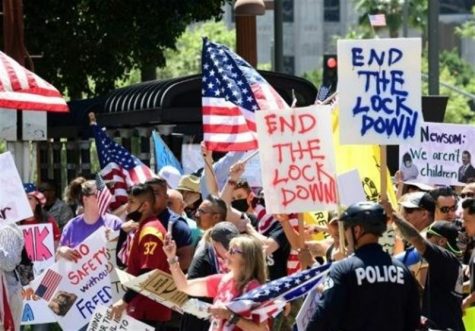 The protests are a perfect example of the ignorance that privilege breeds. In this case, the privilege of not having a loved one fight for their life due to Covid-19, or not having to risk their life day after day to save the lives of victims of the virus. To dishonor the victims of the virus and those fighting to halt its spread by claiming that it is a lie, or that the right to get a hair cut is more important than slowing its spread, is extremely disrespectful.

In addition, the large gatherings of protestors pose a risk to exacerbating the spread of the coronavirus. If one infected protestor were to attend without a mask, the virus could quickly spread through the dozens of people. An article by Standard Media details how one person was able to spread the virus to a dozen people, which in turn have the ability to infect just as many.

The issue, however, is larger than these protestors deciding to endanger themselves. By risking exposure to the virus, they can possibly become infected and continue that spread when they shop for essential goods.

The demonstrations by armed protestors are also dangerous. By attempting a show of intimidation towards local law enforcement, its only a matter of time before things get out of hand and someone gets hurt.